By Lynne Pace - December 11, 2013
A video aimed at inspiring girls to use their imaginations to build (rather than pretend to be princesses) has garnered more than eight million views and drawn attention to the under-representation of women in the engineering field. The two-minute-long video, produced by toy maker GoldieBlox, features three little charmers bored with flouncing girls wearing tiaras and pink dresses on TV, so they don safety glasses, hardhats and tool belts and set off an inventive house-and-yard-wide adventure using toys and common household items. 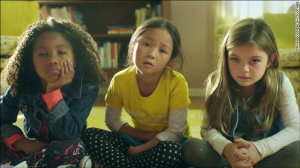 The original video featured repurposed lyrics to the Beastie Boy’s song “Girls,” but has since been changed because GoldieBlox never received rights to the music. Amidst publicity resulting from media coverage of the legal dispute with the Beastie Boys, GoldieBlox Founder Debra Sterling stated in a letter: “Over the past week, parents have sent us pictures and videos of their kids singing with pride, building their own Rube Goldberg machines in their living room and declaring an interest in engineering. It’s been incredible to watch.” Even the revised video has gotten more than one million hits in less than two weeks.