CHICAGO - So who really lit up this city?


Welcome to CFMA on the river . . . the Chicago River; and a fantastic conference!!
By David James, CCIFP, CPA
FNF Construction, Inc.


This conference was extremely well attended with nearly 830 full registrants, 40 from VoS chapter!  In fact, VoS had the second highest attendance, only edged out by Chicago (and they really don’t count, since they were the host chapter - - so this reporter declares VoS #1!!)  VoS was the only  pilot chapter for the Young Professional Leadership Program to have representation by this group at the conference - way to go Nick, Jessica, Michelle and Drew.  You guys are a truly dedicated bunch (also cheap – taking advantage of the ½ price registration fee!!)  There were 24 very wise, career minded individuals who took the CCIFP exam on Saturday, including one VoS member (who shall remain nameless for fear of putting too much pressure on him/her - - but, hoping you did well and will soon join the ranks as a CCIFP!)
This reporter begins his coverage well ahead of the established conference starting point of Sunday evening.  (Is it just me, or do conference sessions start earlier every year - - - pretty soon we will have a 2 week conference and my office will actually notice I am gone .... not good!)
Several of our troops started the CFMA party early this year; as early as a 5 a.m. flight out of Phoenix Friday morning!!  Certain of this group (well, actually only one) was, as usual, flying first class; and a reliable source informed me that the adult beverage consumption began as soon as the doors were secure on the aircraft.  There were, of course, denials of these reports by the guilty party, but I’m thinking if you are flying first class, odds are you are partaking of free drinks!  I will leave Ms. Weber and Mr. Miller to sort out the ugly details here, but for the readers out there, I think most of us know who flies first class to these conferences. 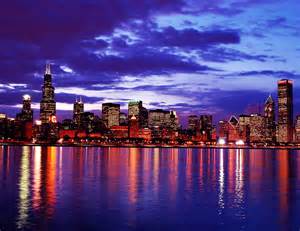 Saturday night found several VoS folks exploring the Chicago nightlife, with no clue where they were or the hip-hop nightclubs they were entering.  Luckily they made it back to the hotel, and to protect them from the Chicago mafia, I have agreed to not expose the names publically.   I would however, suggest each of you watch over your shoulder for the next few months!
Saturday and Sunday sessions were primarily dedicated to Mini-Conferences (grab that CPE!) and CFMA governance.  The annual board meeting was expected to be so exciting, I skipped it!  However, Ryan fulfilled his duty as incoming President by attending and, according to him, actually stayed awake!  But no witnesses can confirm this – as the rest of the audience was snoozing.  This is another example of VoS dedication and leadership, and ability to stay awake under virtually any circumstances! 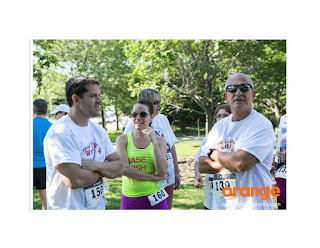 Sunday morning offered golf, more mini-sessions (how many can you have?), a 5K run/walk or sleeping in. Like an idiot, this reporter decided to cover the 5K (and participate).  So Ryan Evans, Michelle Walker and yours truly laced up our running shoes, and boarded the bus to Grant’s park to participate in the Windy City Waddle (I had NOTHING to do with naming this event!).  After arriving at the parking lot, and after over 30 minutes of CFMA leadership trying to find the start gate (way too long a story for this article), the competition began.  I set the pace for Ryan and Michelle for the first 100 feet . . . then they wanted to show off and kick some ass (mine!).  Had it not been for misdirection by CFMA staff at the turn around point (resulting in her running a 5.03K), Michelle would have taken first place in this event; but as it turned out, she was relegated to the #2 spot!  Ryan was close behind, and me . . . well, I have two goals in such events: 1) jog the whole way, no walking allowed and 2) don’t die.  So I achieved my goals!
Sunday evening was the official “kick off” to the conference with a great gathering in the Exhibit Hall.  An opportunity to reconnect with friends from across the country, meet the exceptional exhibitors and partake of great food/drink!  This venue had one of the best Exhibitor layouts of any conference I have attended.
AND then it began . . . dawn peer groups starting at 7 a.m. (5 a.m. AZ time. . .OMG!!) and sessions throughout the day that dealt with technology, leadership, economics, taxes, accounting standards, GC/Sub relationships, human resources . . . . on and on . . . amazing sessions with amazing speakers.  The CFMA mission includes education – and this conference hit the mark!
The “General Sessions” are held once daily for all attendees (so we can see who all is still attending sessions vs. out playing along the river --- yes, I know who you are, and I will be contacting you regarding “paying up” for remaining silent as to your absences – a little extortion will increase my retirement program substantially!).  These sessions are awesome, and focus on global areas of interest:  People issues, IT and economics.  Topics that impact us all! 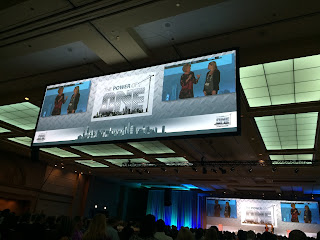 Of course, the session dealing with personality types went a bit overboard (note the river/water analogy . . . !).  After we all determined our personality type (realize 800 folks were trying to declare personality affiliation in 30 minutes or less . . .  turned out I had NO personality - -  go figure!)  Turns out Lisa Autino who was at my table was a social butterfly – go Lisa!  But the most exciting moment came when the speaker was noting the differences between the “senior” generation vs. the “younger” generation. This distinction is often demonstrated by the “time” question: where the speaker asks, “what time is it”?  “My” generation looks down at their wrist, and declares the time; “young” folks have to pull out their cell phone, turn it on - -and declare the time reflected on the screen (wrist watches are not ‘cool’!).  Normally the delta in times is roughly 15 seconds, with the old folks winning out.  In this session, however, Michelle Grider was selected to come up on stage (from a table in the back of the room) and when asked for the time - - smiled her beautiful smile and said “My cell phone is back at my seat!”   So our speaker, pushing her luck at this point, requested someone find her phone and bring it up to the stage. Who else would come to Michelle’s aid  . . . but Marj Weber!!  Undaunted by her foot pain (think she had kicked something when flying first class – see comments above), Marj hobbled up to the stage and gave Michelle the phone --- so a couple minutes after having asked the question, the time was officially declared by Michelle.  Personally I think the speaker did carry on too long with this exercise; either trying to kill time (LOL), or just wanting to “milk” the situation.  But, Michelle and Marj were good sports, smiling all the while – but trust me, DO NOT ask Michelle what time it is ever again – she has a fierce right hook!  Oh, and as a side note here, the speaker gave Michelle her watch as she exited stage right; which, it turns out, was running slow – causing Michelle to be late for her next class! 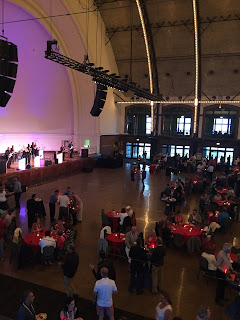 The Tuesday closing party was held on the Navy pier – a very nice location with awesome food and a chance to let loose.  Now, still recovering from the 5K, I did not do much out on the dance floor.  However, Tom and Mary Lawless who obviously slept in that Sunday morning provided their own version of American Bandstand (no one under 55 will remember this classic show); so maybe Saturday Night Fever (no one under 50 will remember this movie); so maybe Dirty Dancing (no one under 40 will remember this heart throb flick); OK . . . how about Dancing with the Stars – everyone should be on board with that - - Thanks Tom and Mary for the entertainment – and we will all watch for you next season on Dancing with the Stars!
Lastly, and saving the most exciting chapter news for my closing remarks, I am excited to announce . . . . Well, actually most all of you already know by now, that VoS won the CFMA Triple Crown:


Chapter of the Year for chapters of our size 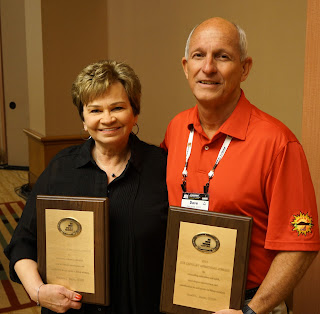 Speaking for myself and Marj (yeah, she gave me Power of Attorney for this article), it is truly humbling to be recognized by our peers who represent the best of the best in our industry and for doing what we love.  Construction is so unique, and the people so awesome, we are proud to be counted among you . . . and thank you for the recognition!


This reporter is signing off for now . . . resting up for 2016 in San Antonio, Texas.  Remember the Alamo, and remember to sign up for education, networking and fun!!  Reliable sources have assured me Davy Crockett’s ghost is planning an appearance!  As a reporter, I cannot disclose my sources, or guarantee results . . . but just sayin’ . . . BE THERE!!!