Our thoughts & prayers are with our friends and family in the Phillipines......

By Lynne Pace - November 08, 2013
(CNN) -- With 25 million people in its path, Super Typhoon Haiyan -- one of the strongest storms recorded on the planet -- smashed into the Philippines on Friday morning.


As the storm plowed across the cluster of islands in the heart of the country, casualties were reported, more than 100,000 people took shelter in evacuation centers and hundreds of flights were canceled.
The storm brought tremendously powerful winds roaring ashore as it made landfall in the province of Eastern Visayas, disrupting communications with a major city in its path.
With sustained winds of 315 kph (195 mph) and gusts as strong as 380 kph (235 mph), Haiyan was probably the strongest tropical cyclone to hit land anywhere in the world in recorded history. It will take further analysis after the storm passes to establish whether it is a record.
Read more:http://www.cnn.com/2013/11/07/world/asia/philippines-typhoon-haiyan/index.html 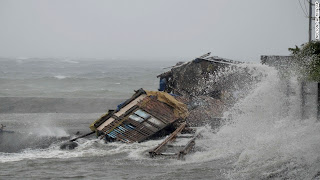