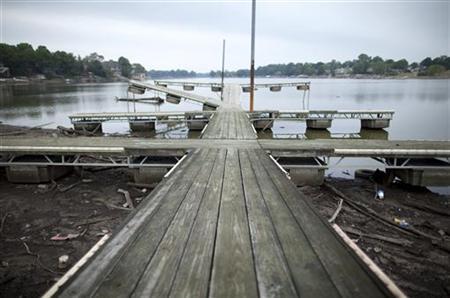 A boat dock now rests in mud at Morse Reservoir as water levels drop due to the current drought near Cicero, Indiana July 19, 2012.

Credit: Reuters/Chris Bergin
By Deborah Zabarenko
WASHINGTON | Wed Aug 8, 2012 11:53am EDT
WASHINGTON (Reuters) - July was the hottest month in the continental United States on record, beating the hottest month in the devastating Dust Bowl summer of 1936, the U.S. government reported on Wednesday.
It was also the warmest January-to-July period since modern record-keeping began in 1895, and the warmest 12-month period, eclipsing the last record set just a month ago, the National Oceanic and Atmospheric Administration (NOAA) said.

the rest of this article can be read at: